We have often told stories of GBV survivors, however, today we’re sharing the story of a woman leader, who is a widowed mother of six girls.
“when my husband died, I saw the look on my daughters’ faces and said to myself that I would do the roles of the father and the mother for them and will not deprive them of anything they need, so I learned how to sew mattresses, and became the breadwinner”.

When her older daughter grew up, she managed to get a job at a hairdressing salon, in which she’s currently a partner. Her other daughter works as a receptionist for a dentist, there, she has learned first aid and now assists the dentist. Her third daughter works as a baker for the neighborhood.
This woman came today to IHAO’s Al-Qawsiyat center to sign up in illiteracy erasing courses.
When women want to lead, there are no ends or limits to their ambitions. 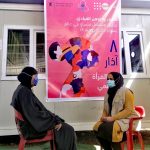